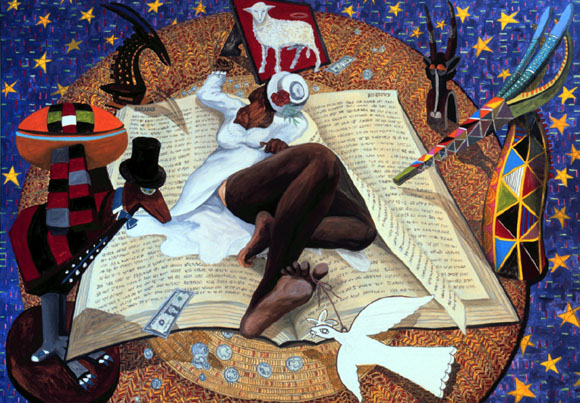 It has been said that the true artist often defies the age-od adage that “ … one cannot go home again.” Home, in the literal sense of its natural properties as well as the dream, of it from the years of one’s youth, can be essential to the growth of the visionary artist. A native of Linstead, Jamaica, Keith Morrison is an artist of consummate vision. His art often takes him home – and indeed the viewer goes home with him – to the Caribbean and sometimes all the way back in time to Africa through a well planned painterly process. Morrison’s artistic journey is ours to enjoy in that as viewers we are allowed to witness the magic of the African diaspora.

Differences between the subject matter and the formal elements of his work are very significant. The forms in his work contain the richness of music and its structural principles, in a similar manner that Wassily Kandinsky used music to reinforce the structure of his non-objective paintings. His work also shows influence of the silhouette figural inventions of Jacob Lawrence. However, the formal qualities of Morrison’s work reveal his originality: he engages in willful play with the picture plane, with space which is real and which is not, with a characteristic use of shadow, line and mass, all juxtaposed against geometric configurations. In sum, the formal structure of his work shows the logic of a highly sophisticated painter.

His subject matter centers in Africa and the Caribbean. His interpretations of phenomena in those areas of the world is potently explored through his use of memory to recount stories about village life and religious practice. There is in his work a re-creation of legend and myth which has been transformed from oral to visual presentation. These works re-construct childhood memories of religious practices, Christian dogma and local lore. For example, a work such as “Baptism” recalls the richness of the special relationship of religion with an admixture of African ceremony and Christian ritual. Morrison’s interpretation of this sacramental act in Christianity is ladened with sexual overtones. In “Spirituals” the artist depicts a voluptuous, sprawling woman in sexual frenzy over the surface of an open Bible that is placed on a collection plate. Seen at the edge of the page are African effigy and ceremonial figures which remind us of the relationship between African religions and European Christianity.

Morrison has said that Francisco Goya’s art has inspired much of his work. This affinity with Goya may be seen in Morrison’s use of satire and the macabre. In his work, themes of death and comedy often combine to form cultural metaphors. In the paintings, the artist sometimes seems to cry while at other times to laugh at his past experiences.

While figural representation o sab essential element in Morrison’s painting, he avoids realism. While there are surrealistic tendencies in his work, its sense of primordial fantasy is independent of the more specific domain of the movement. As wit surrealism, his are fantasies of the psyche; but beyond surrealism, his work is based on age-old myths and spiritual visions which are actually practiced in the cultures in which his art is centered. He relies on the strength of a given image to inform and he convincingly achieves a most extraordinary painterly objective. As a result, he has made a number of actively reflective images which encompass aspects of the mythic dream mixed with certain elements of common history. In such carefully articulated pictorial arrangements as his, a new language of signs and symbols is given: one which is a well-planned part of the tempered vision of a seasoned painter who excels in interpreting the mythic dream.

Dr. David C. Driskell was awarded the Presidential Medal of Honor. He is the author of many books, including Two Centuries of Afro-American Art, Hidden Heritage, and Contemporary Visual Expressions. He is Professor emeritus, University of Maryland, College Park.