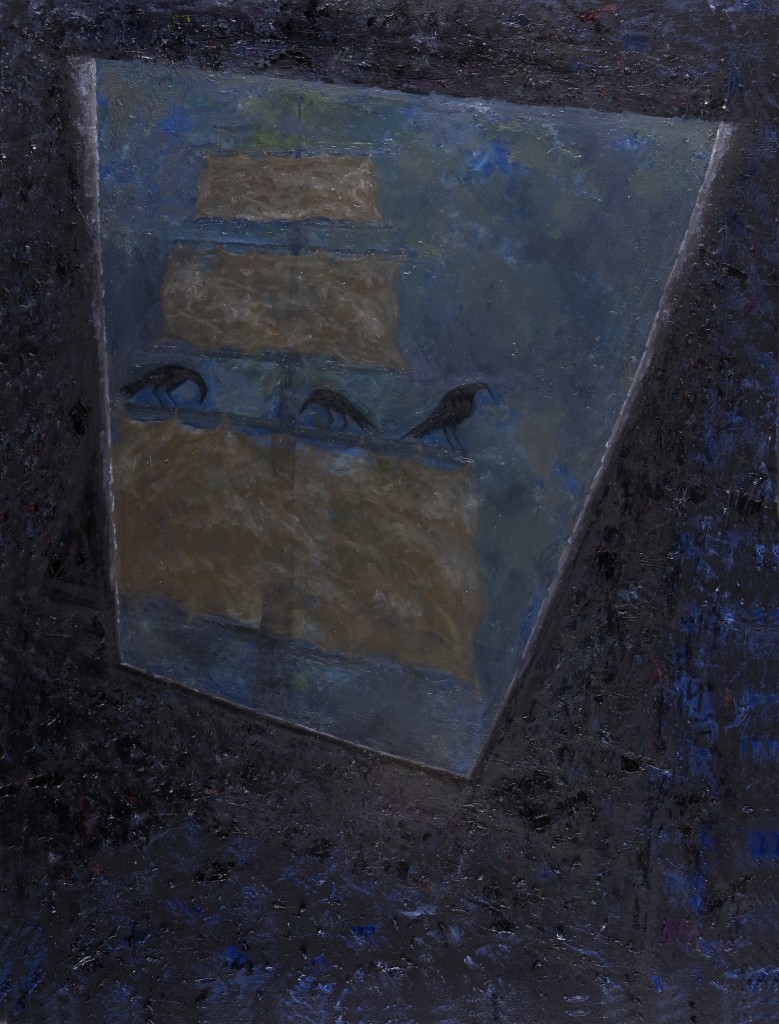 The exhibition Keith Morrison: Middle Passage highlights a selection of oil paintings and large-scale watercolors executed over the last decade by the Jamaican-born artist. Deeply mythical and occasionally ironic, Morrison’s exquisite paintings offer both sensual delight and compositional shrewdness. Settled and unsettled territories, unseen tragedy implied trauma, verdant and enigmatic groves and waterways proliferate his work. Neither astral nor wholly chimerical, Morrison’s imaginary geographies are grounded – that is to say, firmly embedded in the human scale and the artist’s memory of place and sensory experiences.

Engaging personal, local and global concerns, Morrison’s visual language includes a vernacular that is quintessentially diasporic, if not nomadic. Jamaica-born, professionally educated and active in the United Sates where he is black yet not African American, Morrison once referred to his peripatetic life as one of perpetual outsiderness: home is neither precisely here or there, but in-between places and spaces. This is reflected in his formal, pictorial search for “ a new kind of space, real and metaphorical, where the human soul lays hidden”(1). Analogies to the African Americas, lived experiences are pigmented by individual and historical realities; considered obliquely they become tropological and function as artistic wellsprings. As Morrison notes, it is the “pursuit of the abstract spiritual deep inside the reality (2).

The pictorial and iconographic clues in Morrison’s Middle Passage works invite the viewer to situate diaspora – the black or Caribbean diaspora – within a larger framework of human endeavor, freeing it from reductive ideological interpretations associated with birthplace and ethnicity. The work thus resists identification with the subaltern and renders visible then universal, historic phenomena of cultural mélange, in which “blackness” of the Middle Passage encompasses whiteness. The Jamaica Morrison is drawn to pictorially is one of a past visual memory, a retrospective condition in which trauma, tragedy, anxiety, the banal, and comic relief are expressed equally. Responsive to past and present histories, influenced by music, literature, and his physical environs, Morison describes his process as “more intuitive than intellectual.” Yet, formally, his expertly constructed oil paintings and meticulously developed watercolors evolve from a finely honed studio practice that includes preparatory drawings, multiple layers of glazes, and painterly patience.

A recent suite of works by Morrison, forcefully evocative yet reductive in form, gives this exhibition its title: Middle Passage. At once a reference to the cross-Atlantic passage that brought enslaved Africans to the Americas in elaborate trade route – Europe, Africa, the Americas – the significance of Middle Passage is redoubled in the context of Morrison’s paintings that favor an iconography of cultural mélange.

In Middle Passage (2010) and Middle Passage II (2010) (Figures 1.1 and 1.2) Morrison uses a trapezoid – a favored form — to anchor his composition and open the door to narratives of horror: our view is below, within a ship’s cargo hull. Submerged in blue-black darkness we look up toward criss-crossed beams, wind-filled sails, and perched scavenger birds. The central, trapezoidal opening jostles with the rectangular composition, as though ion a rocking motion, emphasizing the watery passage. 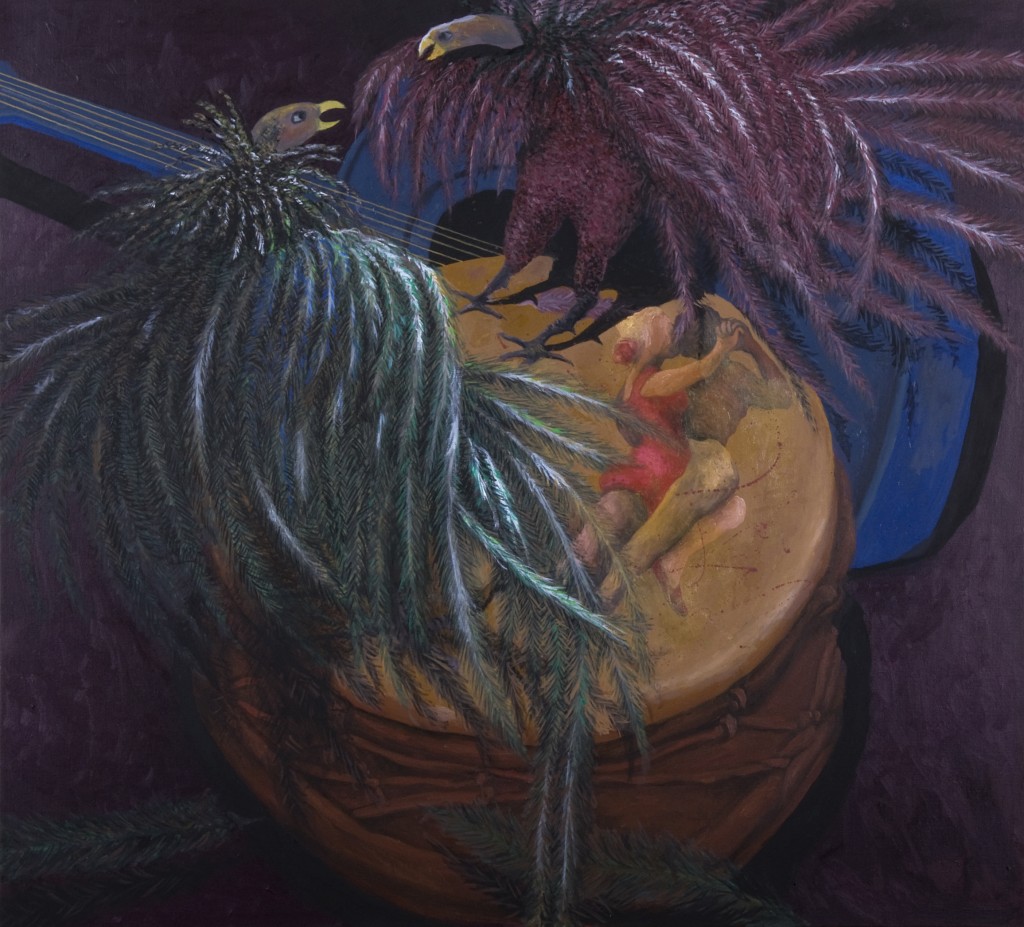 Morrison uses perspective and point of view to evoke emotion. A hallmark of his style, these devices are both disorienting and seductive, as in The Tango (2010, Figure 1.3) and Moment of Truth (2009). In Middle Passage, Middle Passage II, Slave Block (2009, Figure 1.4), and Atlantic (2009) Morrison’s perspective draws viewers into the compositions, where they become witness to a history that cannot be denied. As with Scourge of the Predator (2003) or Sound the Knell Slowly (2001), we sense the trauma but do not see the tragedy directly, though it is not necessarily unknown. Both Scourge of the Predator (2003), inspired by he Four Horsemen of the Apocalypse, and Sound the Knell Slowly bring death and Christianity into incongruous relation. The former centers on apparitions of death and the latter slyly interrogates the place of Christianity in the history of blackness through its inclusion of three crucified black figures. 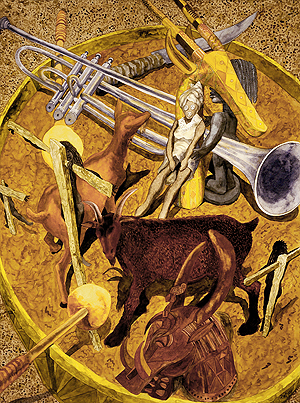 Morrison’s paintings provide keen sensory experiences, whether the subject is macabre, melodic, or macaronic, and his narrative interest is expansive. The exhibition’s title, Middle Passage, positions the artist’s work in a strategic conjuncture: that of Africa, the Americas/Caribbean, and Europe. Morrison has long savored both the comedy and the tragedy wrought by cultural encounter – the malapropisms or slippages within hotpotch cultures that are descendants of colonial slavery. While the verdant greenery and varietals of Morrison’s botanical imagery are largely imaginary, the objects that populate his compositions are usually real, in some case objects that he owns: musical instruments, Yoruba ibeji figures, wooden snakes, and a parrot 3. Yet these objects are not studio props, since Morrison does not work from models; he works instead from memory and visual imprints. This process, which favors creativity over authenticity, allows the artist to interlock the forms in a way that is intrinsic to his compositions. These in turn support the artist’s interest in counterpoint – that is, contrasting color, conflicting shapes, and visual misdirection.

In many of Morrison’s compositions, humans coexist with animals, reptiles, and animated icons. Described by the scholar Renee Ater as “human substitutes in fantasy tableaux,” Morrison’s animated icons are cultural locators that help advance the artist’s visual fable. 4. As with many great poets and novelists, Morrison’s development and use of narrative imagery moves allegory beyond the symbolic. Isis, Egyptian goddess of motherhood, magic, and fertility and protector of the dead, is cradled by an ibeji-like figure in Slow Boat (2003), Figure 1.5); a playing card dances across a guitar in African Tango (2000, Figure 1.6); and in Market II (2004, Figure 1.7) a wild, blue horse conjurers a cartload of vegetables. 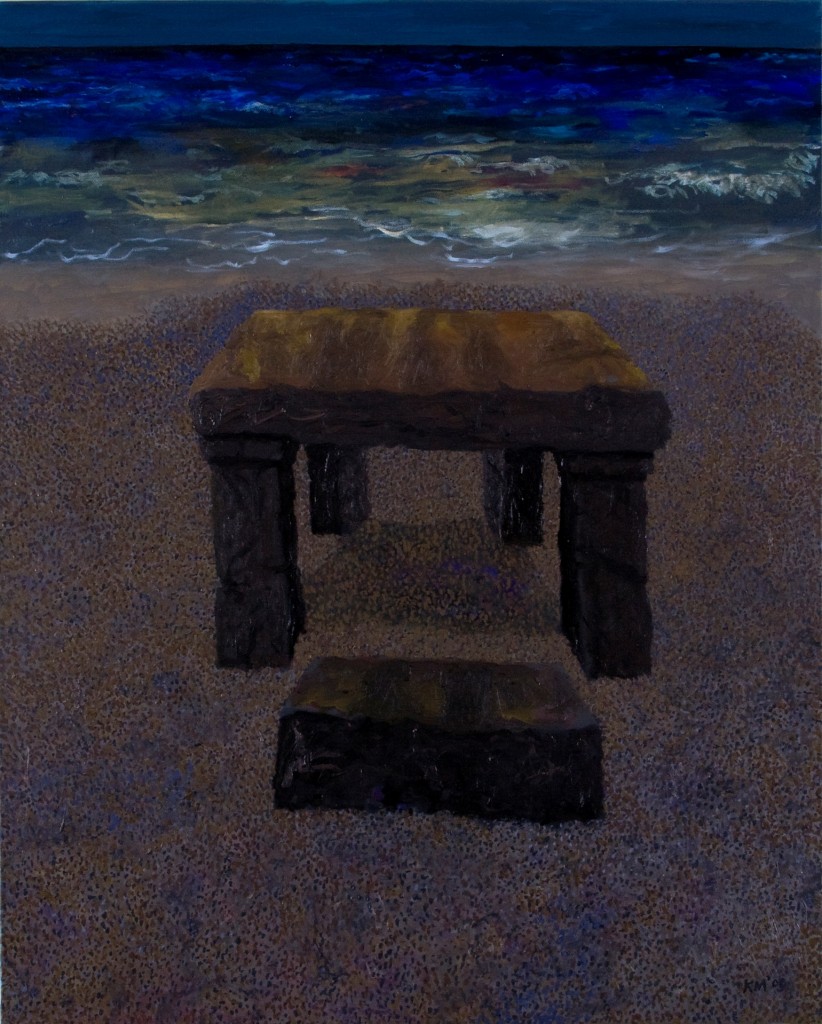 Morrison’s playful interest in perspective and planar juxtaposition emerged in the late 1960’s and 1970’s alongside his interest in abstraction. Indeed, Morrison’s artistic evolution includes alternative currents: periods of pure abstraction and then figuration 5. These forces are fully merged in his recent work and help activate the composition. The figurative imagery retains the language of Morrison’s early abstraction and both are enabled by the panoramic view. Abstraction is a constant throughout his work, at times unexpectedly -– Morrison routinely uses recognizable objects as abstract, compositional elements. The trapezoid shape that doubles as the hull opening in Middle Passage exemplifies this technique. In Sound the Knell Slowly a drumstick doubles as a halo for one of the crucified. An upright drum serves as staging in both Sound the Knell Slowly and The Tango, and a supine guitar functions similarly [as in] African Tango and Katrina (2009, Figure 1.8). In Katrina the guitar becomes the watery City Bowl of posthurricane New Orleans, the playground of sharks and souls of the drowned. 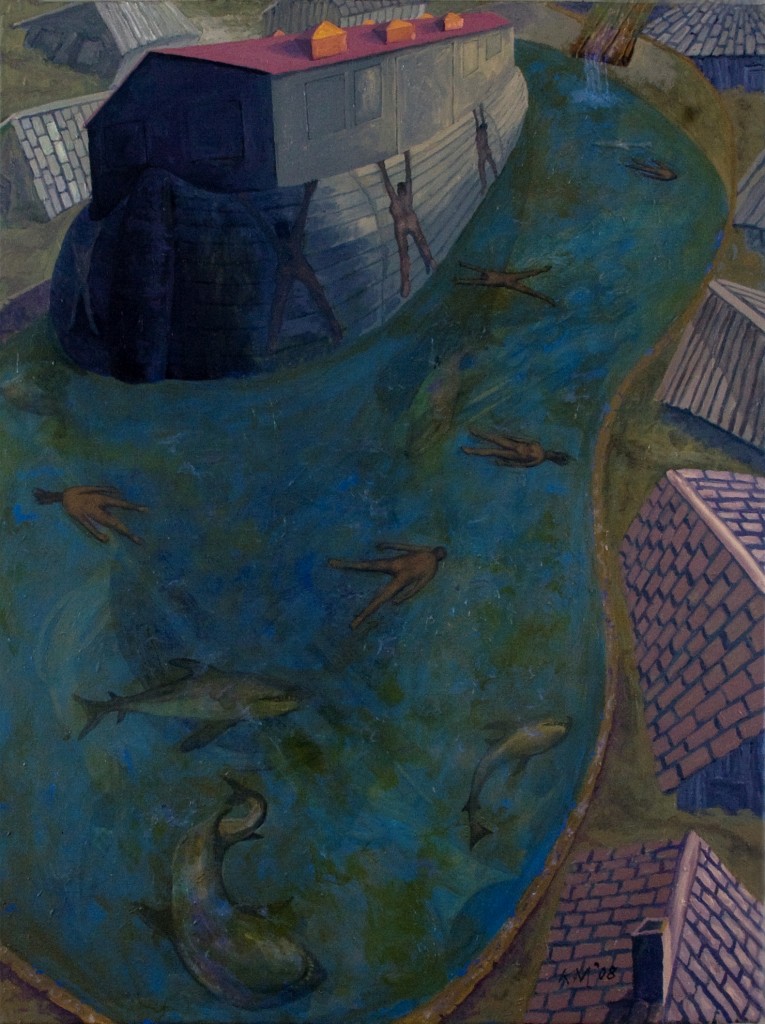 Morrison’s recent paintings are more restrained but epically poetic. The complicated approach to abstraction and figuration found in watercolor such as African Tango is supplanted by beguiling surface depth. The interlocking elements animating the surface of African Tango becomes penetrating tendrils, rooted in layers of glaze, in Sentinel (2008) and Hawk (2009). For Morrison, the specter of death hovers in and near bodies of water, especially rivers and ponds. The aqueous realm, featured in many of Morrison’s paintings – Sentinel, bayou, Hawk, enigma (2010, figure 1.9), and others – is partly mythic and partly real. Like the pictorial space the artist conjures the watery abyss is a metaphorical space, one where human souls lie hidden, and emblematic of the spiritual deep within the artist’s abstract forms.

Keith Morrison, e-mail to the author, September 5, 2010
Ibid
Ibeji figures, distinctive of Yoruba art and culture of Nigeria, are carved statues or spirit figures. For Morrison’s use of the ibeji, see Rene Ater, Keith Morrison (Petaluma, CA: Pomegranate Communications, 2005), 74, 81.
Ibid, 69
As Morrison notes, “I have pursued challenges between figuration, abstraction and narrative for most of my painting career.” Morrison, e-mail to the author, and Morrison, interviews by the author, over a period of a year.