Kenneth Baker: “Keith Morrison’s Art is the Stuff of Dreams” 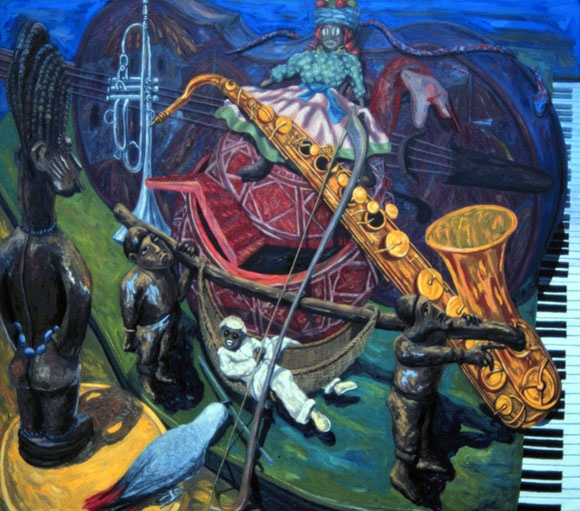 To externalize the dreaming process is one of the noblest and most seldom fulfilled possibilities of contemporary painting. We get rare, exciting glimpses of it in the work of Keith Morrison at Bomani Gallery.

Morrison, who is dean of the college of Creative Arts at dean Francisco State University, was born in Jamaica in 1942, but has lived in the United sates for many years and has travelled extensively.

His paintings are improvised images that reel between memory and fantasy, travelogue and rebus, borrowed and private symbols, References abound to the landscape and culture of the Caribbean, Africa and urban America

Many painters attempt the sort of free association Morrison practices, but of all modes of pictorial expression it may be the most difficult to sustain. Even Morrison’s wok can collapse into slapstick, as in “Red Sea “ (1995) or the didactic staginess of Cybercity” (1994).

But when he keeps the difficult balance of not knowing what to do and doing it anyway, as in “A Night in Tunisia” and the dazzling “Crabs in a Pot” (1994) his images can stop the mind in its tracks.

To my eye, Morrison’s touch with paint is almost too relaxed, but if that looseness is the price of freedom he feels to deploy color, then to fault him for it would be eaviling.

His touch proves itself, though, in his manipulation of space. As in a dream, the objects and settings in his pictures seem to change dimensions with the intensity of your attention to them.

Focus on the background still-life objects in “A Night in Tunisia,” quiver with narrative insinuations, and the curved profile near the top of the picture feels like looming mountains. Only when you switch focus to those lavender-mottled curves do they show themselves to be the silhouette of a bass resting sideways atop the grand piano that forms the composition’s ground plane.

The elastic space of Morrison’s paintings cuts a middle path between the tormented spatial distortions of Max Beckmann’s allegorical pictures and the loopy reveries of Robert Colescott. 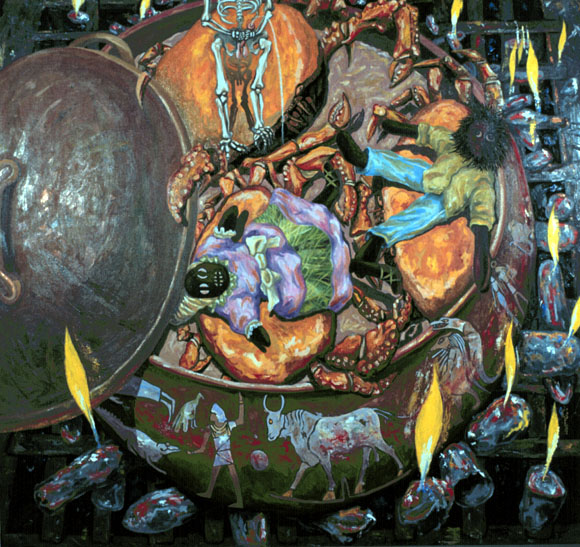 Our everyday personal conduct rests on overestimation of the value and effectiveness of conscious control. Freud suggested that dreaming, not wakeful self-consciousness is the true model of mental life. And in Morrison’s best paintings we meet a similar notion, with the critical difference that Morrison performs his theory athletically.

I nominate “Crabs in a Pot” as a comic masterpiece. In it I see the painter trying to exorcise with laughter a private vision of the last judgment.

One of the best-known art writers in the U.S., Kenneth Baker began his career at the Boston Phoenix and has been the resident art critic at the San Francisco Chronicle since 1983. He covers a wide range of contemporary and historical art exhibitions, writing on the Max Beckmann retrospective at the Museum of Modern Art in New York and the “Illuminating the Renaissance” show of manuscripts at the Getty (for example) along with art events of more local interest. He is the author of Minimalism: Art of Circumstance (Abbeville, 1989) as well as many catalogue essays.