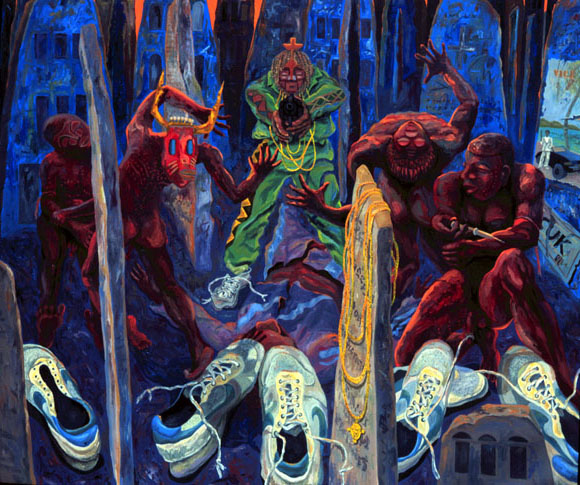 Considering the current interest in art focusing on political and multicultural issues, Keith Morrison’s paintings were timely and instructive – timely because of their social themes, and instructive because of Morrison’s reluctance to sacrifice aesthetic or philosophical substance in the service of overt polemics.

In the watercolor Hat Ladies, 1989, Morrison, who is from Jamaica, employs a touch of humor in combatting African and Christian Themes, by placing there brightly decorated hats on an open Bible. These hats – the kind worn by black women on their way to church — symbolize the religious faith of African-American women: their steadfast journey to church functions as a subtle metaphor for the black struggle more generally. Banana Republic, 1989, a watercolor for the same year, features brightly colored refuse – boxes and books of matches, banana peels, etc. –scattered on the ground to symbolize the careless plundering, by First World corporations of Third world countries.

The clarity of Light, openness of composition, the lyrical color in these watercolors, however, work against their subtle but serious subject matter. This becomes especially evident when comparing the oil/acrylic painting Banana Republic, 1990, with the watercolor of the same title. Even though the painting is much larger, its composition is tighter and this more unsettling. This is not only due to the darker color scheme, but is also the result of the fact that the strewn refuse, which now includes cigar butts and a child’s toys (railway tracks, a caboose, an automobile, and a crane), is more compacted, filling the picture plane wit larger than life-size elements. This compression produces greater visual tension in the figure/ground relationship, while the change in scale provokes a slight sense of the fantastic, comically framing this view of adults acting like children.

Two still-lifes entitled Night in Tunisia and Vanitas (both 1991) differ in theme, yet they show a similar concern for color and compositional invention. While reminiscent of the still lifes of Audrey Flack, Vanitas replaces Flack’s commercial color and harsh photographic light with a warmer, richer palette. Atop a red dressing table strewn with jewelry and cosmetics, a green parrot, attempting to impress an onlooking pigeon, “dances” atop an orange hand-mirror, creating a whimsical scene.

The influence of Morrison’s Afro-Caribbean and Afro-American cultural background is subtly suggested by the parrot as well as by the color scheme of Vanitas, and it is explicitly stated in Night in Tunisia, the title of which comes from a Dizzy Gillespie song. This large painting features African sculptures with Western musical instruments – a saxophone, a stringed bass, and a piano. Morrison’s idea of cultural exchange, however, is not to be found in strictly literal and superficial clichés. As Tombstones, 1991, makes plainly evident. His investigations of culture are more deeply philosophical. Suggesting a modern-day Demoiselles d’Avignon, in which Picasso’s nude women are transformed as black men, Tombstones is an allegory of sorts about drug use. Spread across the shallow space of the picture, four men do a deadly dance around a sinister central figure who points a gun at the viewer his next victim. Huge tennis shoes line the edge of the picture and vertical tombstones/tenement houses mark foreground and background. Seen against an intense orange sky, these vertical slabs suggest the gaping jaws of a monster.

The idea for the composition, according to Morrison, came from Peter Sellars’ version of Mozart’s opera Don Giovanni, entitled Mozart-Da Ponte Cycle, 1989, a production set in the shells of empty Bronx buildings in which Mozart’s feast becomes a cocaine-shooting party. What Morrison ahs done is to extract from Mozart’s 18th-century opera the universal themes of lust and morality, freedom and addiction, life and death. His figures, while contemporary, participate in a drama that is not ununique to any specific culture or time. Like Mozart, Morrison presents a dilemma of human beings at the brink of the abyss, about to be devoured by their own frailties and vices.