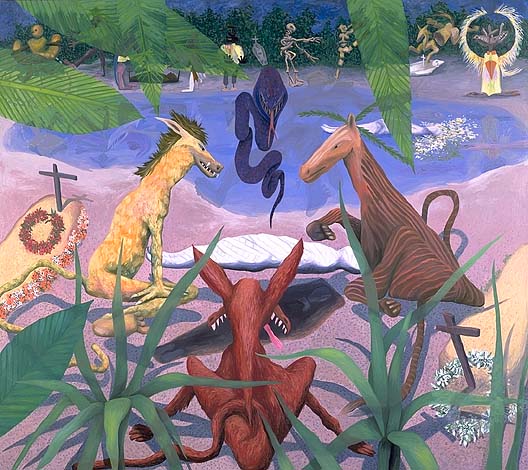 Sunset shot weird amber tints in the eyes of

through the crinkly heads of mule boys tiredly

bowed over the reins of some starved-out

I first became aware of Keith Morrison’s work in 1980. As I recall, I was bombarded with colors and patterns. No illusionistic renderings, just two-dimensional areas of energetic brushwork, brilliant chromatics, and painted rhythms. When I ponder these paintings, it was as if I had been slapped with a ream upon ream of Kente cloth, so much so that stars, waves, and geometries hovered before my eyes. Those confident, euclldean, color field canvases attested to Morrison’s mastery of the craft of juggling non-referential image-making with sub-conscious, barely perceptible echoes of culture.

But something happened to Keith Morrison in the mid-1980’s. Around 1985, Morrison began to incorporate figural elements into his paintings that had a decidedly imaginative and fantastic character. The patterns and colors of his earlier paintings remained, but now in service to a painted world of tropical settings, iconographic tableaux, and African/Afro-American personalities.

While some might perceive that shift as merely another instance of an 80’s artist reaching out – via narrative elements – for more meaningful, culturally grounded expressions, one should be aware that Keith Morrison wields an array of roles in his community (painter, teacher, curator, and critic), and that all these “hats” have provocatively come together in his post=1985 work. Morrison’s role, rather than colliding, blend in his paintings as does Christianity with traditional African beliefs (in Vodun), or okra with tomato (in gumbo).

A student of (as well as a participant in) black world culture, Morrison’s art is the very face of the African Diaspora. In these paintings, we witness: baptisms, funerals, and marriages: the cultural artifacts of Africa, South America, the Caribbean, and the U.S.; aphorisms and adages of the collective, black folk tradition, and much, much more.

Of special note in this panoply of black, brown, and beige icons is the recurring image of the gargantuan, all devouring mouth. Situated to the front (and slightly at an angle) of the picture frame, this enormous cavity is frequently depicted with stiletto, bone-like teeth around its edge. Whirling into the depths of the mouth’s ruddy interior (or perhaps emanating from its deep throat) are a virtual lexicon of Africana: sculpture, tools, architecture, flora, fauna, and humanity; all engaged inn what seems like an endless struggle for survival.

In a sense, Morrison’s use of this headless, theatre-like flytrap underscores the artist’s frank and often fatalistic point-of-view when it comes to conceptualizing the world. There is no sweetness, no fawning romanticism ion these visions of old and new black culture. Instead, we are confronted with cockfights, battles between natural enemies, and do-or-die spectacles. Like Trinidadian calypso, Puerto-Rican plena, and Afro-U.S. blues, Morrison’s visual narratives abound in hard facts, served up in lush surroundings and syncopated splendor.

Those oracular dentures in his work symbolize the oral force behind all of Morrison’s oil-on-canvas paintings. First as a colorist and now as a visual griot, Keith Morrison explicates black reality through the medium of painting with a solid understanding of its implicit rhythms and odd turns of irony. Like the fable of the trickster/spider Anansi, which traveled with Gold Coast Africans during slavery to the New World, Keith Morrison’s painted tales weave a web of human exploits, bestial behavior, and spiritual judgment and retribution.

and Dean of Humanities within Trinity College, Duke University