The Art of Keith Morrison 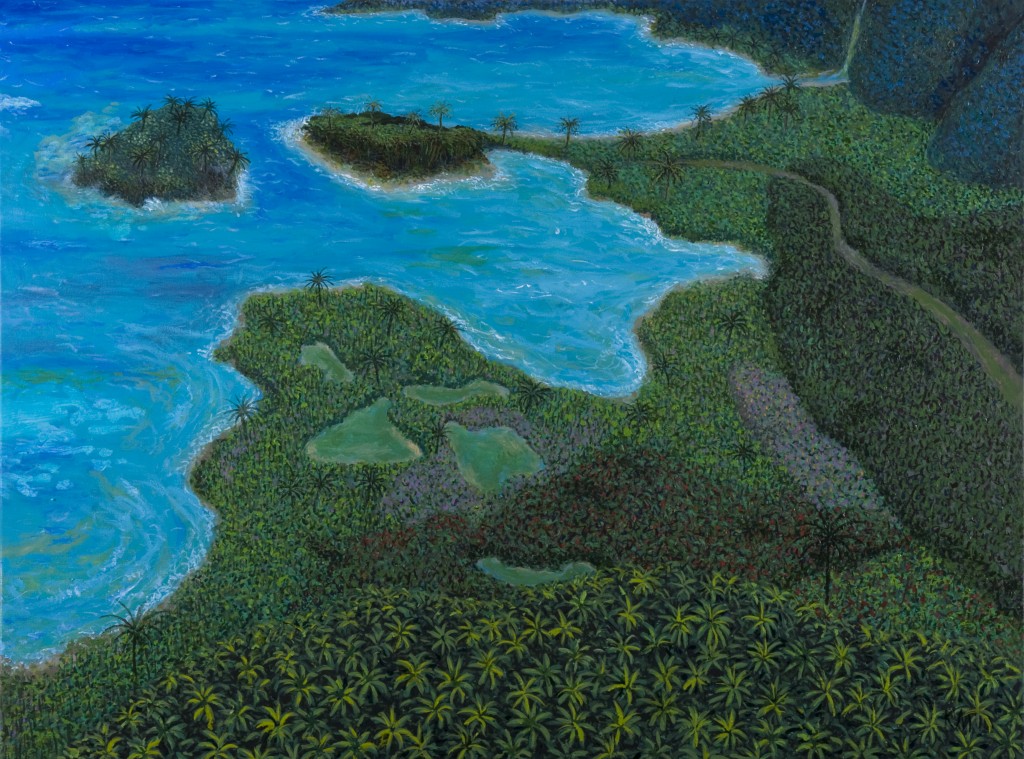 This year between September 7 and December 11 the Mechanical Hall Gallery of the University of Delaware features a superb solo exhibition of selected works of the internationally acclaimed Jamaican prize-winning artist, Keith Morrison. The exhibition is called simply, “Keith Morrison: Middle Passage” and covers three spacious rooms. Morrison has many paintings titled Middle Passage. Only two on display along with another called Atlantic are directly related to the notorious transatlantic migration of enslaved Africans. The two are dark and depressingly sad.

But this exhibition is really not about Africa or the transatlantic slave trade. Instead, the selection represents a delightful panorama of superb oil paintings and large watercolours done by the artist over the past decade that powerfully illustrates his elastic versatility and exquisite use of colour and form in a seductively engaging visual narrative that forms the essence of Morrison’s artistic style. Morrison’s paintings are more than mere works of visual art. They are observations drawn from literature, history and geography as well as evocative memories intricately woven into complex presentations that stimulate the mind while feeding the eyes.

Morrison is not your conventional commercial artist. He is also a highly accomplished curator, art critic, educator and lecturer. Born in Linstead and educated at Calabar High School, Morrison studied at the School of the Art Institute of Chicago where he distinguished himself gaining both Bachelors and Master of Fine Art degrees. Over almost half a century he has produced close to 1,000 paintings, sometimes working on as many as six different subjects at the same time. Like Mozart, he visualises the completed work and works tenaciously until the canvas approximates the mental image.

These works are distinguished enough to be found in some of the most well-known public collections around the world: the Art Institute of Chicago, the Cincinnati Art Museum, the Philadelphia Museum of Art, the Jamaica National Gallery of Art, the Pennsylvania Academy of Fine Arts, the Corcoran Gallery of Art and the Museum of Modern Art of Monterrey, Mexico.

Yet it would be a great mistake to think that all Morrison does is paint. He has a very full and active life teaching, travelling and commenting about art on radio and television. His discussions have also appeared in numerous journals, books, catalogues and museum publications.

In an insightful essay in the Delaware exhibition catalogue, curator Julie McGee expertly captures the essence of Morrison’s work. She writes: “Engaging personal, local, and global concerns, Morrison’s visual language includes a vernacular vocabulary that is quintessentially diasporic, if not nomadic. His pictorial and iconographic clues connect but do not bind his work to a black or Caribbean diaspora. Responsive to past and present histories, influenced by music, literature, and his physical environs, Morrison describes his process as “more intuitive than intellectualised”. And so it is.

Apart from his skilful use of colour, what sets Morrison’s art apart is the consummate skill with which he manages to conflate religious and secular, real and imaginary, or the triumphant and the trivial. Several genres of art flow seamlessly through his work, although it is possible to trace some evolution from his more abstract early art in the 1970s to a complex figurative contemporary design that his biographer, Renée Ater, calls “a painterly storyteller”.

Much of his Jamaican childhood and his later global wanderings permeate his art. The exposition in Delaware has a lovely panoramic view highly reminiscent of Port Antonio harbour and Navy Island. It also has a market presentation that could be a Linstead market scene. Morrison admits that the port scene is a stylised memory of his first visit by train to Port Antonio at the age of nine which he then thought to be the most beautiful view he had ever seen. Many years later he painted the scene from memory.

There is also a delightfully intricate watercolour composition called African Tango, and an extremely interesting bullfighting painting. This representation is quite unlike the famous painting of Manet with its large cast of characters around a stricken bull in the bullring. In Morrison’s painting the bull is the overwhelming central feature. From afar, the composition seems to be a simple but dramatic bullfight poster. Closer, however, the picture overflows with symbolism. The bull is attacking a bloody cape and only the hands of the matador are apparent. The three-coloured, barbed banderillas oddly placed in the oversized back of the bull are really crosses bearing individuals, presumably a scene of the crucifixion of Christ.

Although much of Morrison’s art is autobiographical, it includes astute political commentary and reflections on his travels, his observations, his reading and musical tastes. One of his paintings is called Wide Sargasso Sea. Religion, magic, rituals, celebrations of life and premonitions of death abound along with water – in bayous, in rivers, or the sea. People, plants and animals commingle in ironic and comedic situations. There are so many levels of understanding that the art becomes a sort of X-ray of the artist’s impressively vast erudition. Nevertheless, Morrison’s art, unlike the writings of someone like Jorge Luis Borges, never intimidate intellectually. Rather, his art is gently accessible to the eyes with abundant food for thought. This extraordinary artist and his exceptional professional career constitute a truly Jamaican jewel.
Read more: http://www.jamaicaobserver.com/columns/The-art-of-Keith-Morrison_9882909#ixzz1n94HzhJW