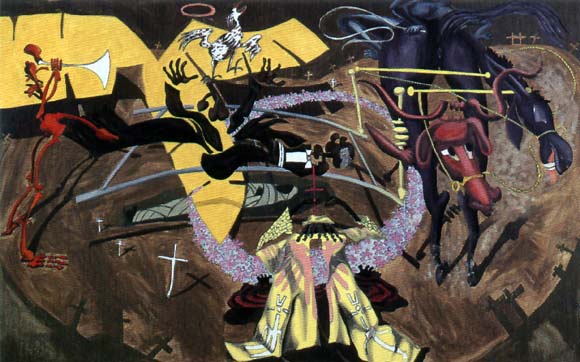 Charles Merewether: “Transformation and Renewal”
Myth and Magic in America: The Eighties

I am fascinated with the idea that the achievement of high civilization is often accompanied by the achievement of high primitivism. Ritual ceremonies, cultivated to symbolize our highest values, often reveal savagery. High mass, in which we eat His flesh and blood, is a symbolic form of cannibalism. Some of the highest rites of Ancient Africa and meso-America involved human sacrifice. The equation of civilization and barbarism as part of the same whole is a recurrent theme in my work.

Death recurs throughout his paintings in a way in a way of both pointing to the presence and power it exercises’ over African and African-American cultures. It s both the continuity and end of myth. In Bones of Africa, 1986, [p. 173], a skeleton, presumably of a black person, is served up on a plate with knife and fork. In A Wreath for Udomo, 1986 [p.172], African leaders die in the face of their struggle for liberation from Western colonialism and domination. Elsewhere he pictures the everyday culture of black people with its rituals of baptists and spirituals, its beliefs surrounding dolls and animals, and customs over the dead and living.[1]

With ironic humor, he creates a sense of a society in conflict, reduced to an unstable transient reality. The Ritual of Death is a Black Tie Affair, 1986 [p.174], pays homage to the benign spirits or ghosts (duppies) who in Jamaica appear on the ninth day after the death of someone. Morrison represents them as ghostly forms who appear dancing and singing alongside two-headed horses, androgynous persons, serpents and a corpse in formal attire. But such paintings seek to undo folklore as a quaint pastime off black people caught up in outmoded customs and traditions that have no bearing on the real world. What Morrison shows is an awareness of the perverse construction of primitivism, perverse because it indulges in brutality and destruction under the guise of civilization. This perversity allows him to laugh, to reveal the cruel absurdity, while at the same time, to recover a sense of the power of death over the living.

As with Basquiat, the work is neither modernist primitivism