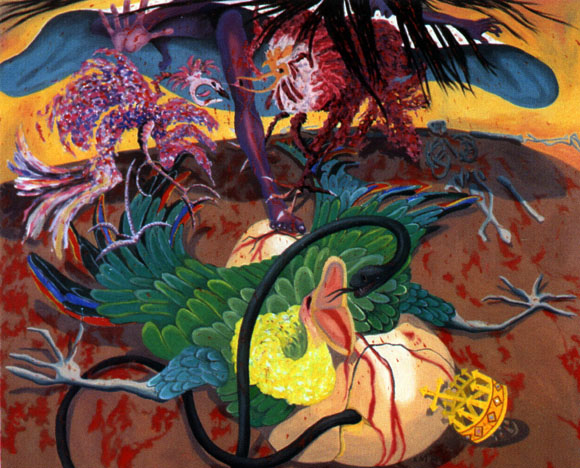 Peter Schjeldahl: “The Time of the Meteor: U.S. Painting in the 1980’s”
From the catalogue:

Myth and Magic in America: The Eighties

The burning out of the meteor of the 80’s, as regards painting has left a strangely mixed feeling of loss and gain, a sort of collapse into richness – as at sunset when darkness reveals a sky full of stars. “The triumph of American painting” is over. Its dream of the past, embodied in a centralized Western mainstream tradition, and its dream of the future, figured in an always impending integral U.S. high culture, have disintegrated. The shattered bits of these dreams – many traditions, many cultural identities – are now dreaming in their own right. This show’s selection of on-European-American painters – Carlos Almaraz, Luis Cruz Azaceta, Gronk, Hung Liu, Keith Morrison, Lari Pittman, Juan Sanchez, and Jaune-Quick-to-See Smith – displays some of the impulses that have come to prominence since the end of the 80’s. What they have in common is precisely a consciousness of fragmentation, envisioning a new past and a new future modeled not on some yearned-for Eden or Utopia but on the present fact of a multitudinous society. Aesthetically, these artists may seem conservative, reacting against modernist ideas of permanent formal and stylistic revolution in art. Nor are they “non-Western” in form and style. They seem comfortable with the old double virtue of Western painting: its capacity to symbolize individual consciousness while representing collective meanings. All of them use elements from the repertoires of (mostly expressionist and surrealist) modern art. But the attitude of these toward their influences is radical in its favoring of local content over global form as the fulcrum of meaning. They revolt against the notion of a centrally defined universal culture. Their new ideas entails energy in tune with authentic particularities of race, nation, sex, and class.

Azaceta, a Cuban expatriate in New York since 1960, is a legitimate hero of the multicultural movement, as one who persevered in the shadows of the U.S. art world with work that bore lonely witness to the ordeal of life forever exiled from a former culture and never truly arriving in a new one. He has long made art whose quality earned him a career, but whose content was largely ignored as the sort of vestige of ethnicity that the myth of the U.S. melting pot naively expects to disappear. In contrast to Azaceta’s isolated struggle for his identity it is the conviviality of the younger Nuyorican Juan Sanchez, whose idiosyncratic mix of painting and collage connects in innumerable ways with the ties that bind together an unmeltable community. The Mexican-American Almaraz, the Chicano Gronk, and the Native American Jaune-Quick-to-See smith practice lyrical painterly styles with firm traditions, and even fashions, in U.S. paintings of the last three decades. Their ability to revitalize these styles with fresh content from their cultural backgrounds supports the argument that their ethnicity is no mere spice to present paintings, but a condition of its further life

Lari Pittman, Keith Morrison and Hung Liu relate more directly to the character of dominant New York and European art of the 80’s. They differently address the condition of practically universal exile that has gone by the appropriately confusing term “postmodern” – that is, modern by other means. Pittman is Columbian-American, Morrison is Jamaican-American, and Liu is Chinese-American, and their overt imagery calls attention to their heritages perhaps even more insistently than that of the artists already named. But each uses the fictive space of painting or painting-construction not so much to communicate content as to thrust it into a zone of depersonalized subjectivity: decorative and ecstatic for Pitman, haunted and hilarious for Morrison, and semaphoric and ironic for Liu. Do these artists point to the possibility of a revived U.S. painting tradition which, having paused to assimilate the historic fact of multiculturalism, will flow onward in a new mainstream? Confronting the delirious and yet disciplined explosions of Pittman’s art, I sense an obscure and subterranean recirculation of imperatives – synthesis of the literal and the abstract, say, and of public and private mind – that drove Jackson Pollock long ago. The present phase of U.S. painting is clearly transitional, in any case. The authority of painting rests on a delicate and intricate web of social agreements that in the U.S. now is chaotic. But I suspect that the chaos will prove to have been fecund, and that by the end of the 90’s the old craft of painted pictures will have helped tell a new story of the nation.

Peter Schjeldahl, poet, critic and educator, has been a staff writer at The New Yorker since 1998 and is the magazine’s art critic.